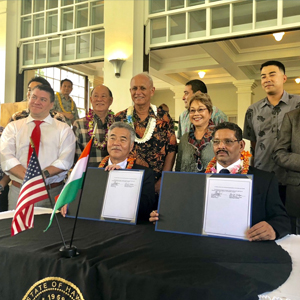 HONOLULU – The State of Hawaii and Goa, India, signed an agreement to enter into a sister-state relationship today.

Gov. David Y. Ige, signed a historic agreement with delegates from Goa, a state in India, which is Hawaii’s first sister-state relationship with a jurisdiction in India. The Director of Art and Culture, Gurudas Pilarnekar, signed on behalf of the Goa state government.

The agreement will promote trade, tourism, information technology; and exchange of health and wellness, agriculture, culinary art, education and cultural programs between private sector organizations and universities of both states.

“The U.S.-India partnership is an important one, and the Hawaii-Goa relationship will help strengthen this bond. We welcome people from Goa to invest in Hawaii’s economy, and share their traditional and cultural values with us,” said Gov. Ige.

U.S. Representative Tulsi Gabbard met with the Prime Minister of India, Narendra Modi, and political leaders of Goa during her visit to India in December 2014. Congresswoman Gabbard said, “I shared my vision with the Goa representatives to establish a sister-state relationship between Goa and Hawaii. I am overjoyed that this relationship is coming to fruition for both Hawaii and Goa are exemplary places of peace and tranquility.” 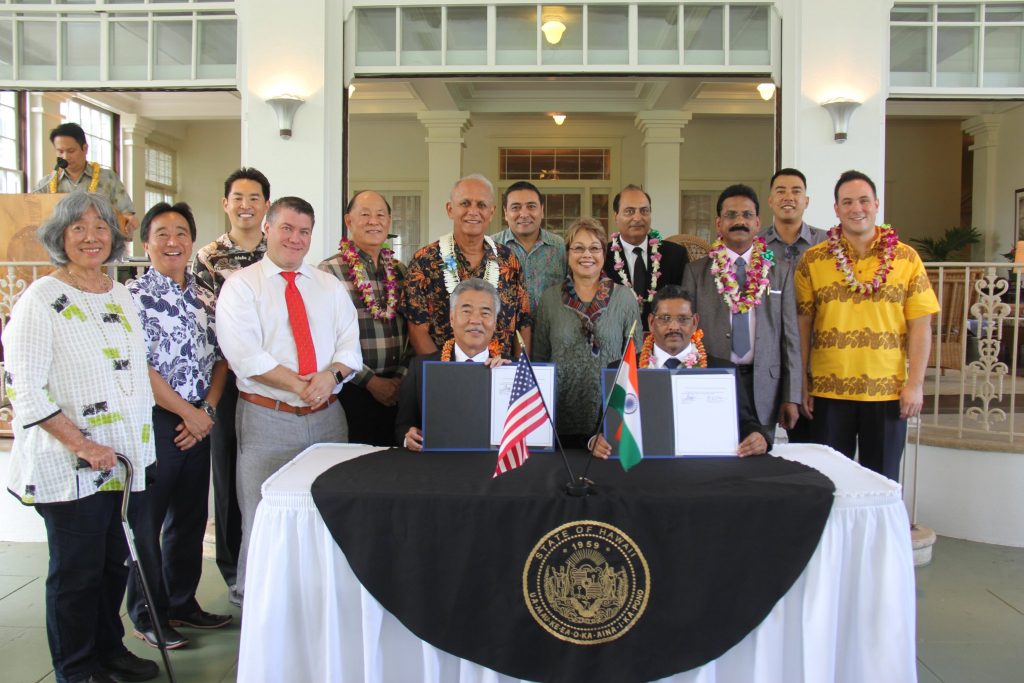 Dr. Kumar stated, “This historic agreement represents a mutual commitment to begin a fruitful relationship that will promote the economic, educational and cultural development of two great states.  This affiliation will unite the people of Goa and Hawaii.”

Sen. Taniguchi noted that, “India is not only the world’s largest democracy, but it also has one of the fastest growing economies. Educational and intellectual exchanges between our schools and institutions of higher learning can greatly benefit from this relationship.”

Rep. Ito added, “I look forward to Hawaii developing more business and cultural linkages with Goa, India, for the benefit of both.  India’s rich heritage fits well in the fabric of Hawaii’s rich mix of cultures.”