Governor Neil Abercrombie and Governor Tokihiro Nakamura of Ehime Prefecture reaffirmed the Hawaii-Ehime Sister State agreement to mark the 10th anniversary of the special relationship that was initiated by DBEDT and established in 2003. “The Sister-State reaffirmation signing will formalize the furthering of relationships between the State of Hawaii and Ehime Prefecture in the areas of commerce, education, social and cultural exchanges,” said Abercrombie.

Although the relationship began with a tragedy aboard the Ehime Maru off waters of Hawaii on February 9, 2001 in which nine people lost their lives after a collision with the USS Greeneville, Hawaii and Ehime have continued to pursue acts of goodwill and friendship.

During the 10 years of relationship:

Over 250 government, business and community representatives from Ehime Prefecture arrived on a chartered flight from Matsuyama City, Ehime, to participate in the various activities to celebrate Hawaii’s 10th Anniversary Sister-State Relationship with Ehime Prefecture. 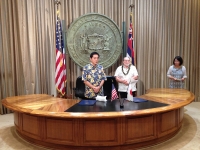 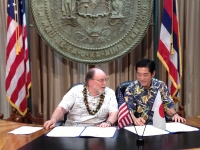 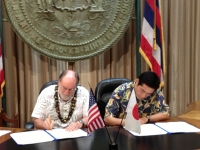 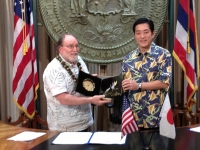 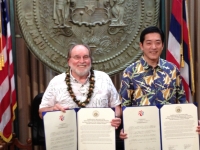 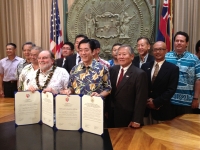