During the visit, official government meetings were held with U.S. Ambassador Caroline Kennedy and U.S. Consul General Joel Ehrendreich to encourage support of Hawaii’s renewable energy programs as well as the Administration’s efforts to increase the number of international students studying in Hawaii.

First Lady Dawn Amano-Ige addressed over 100 students and educators during a Okinawa-Hawaii International Student Exchange Seminar.  It was a tremendous opportunity to reinforce the message that Hawaii welcomes students from Okinawa and encourages academic and professional exchanges with schools and universities in Okinawa.

Governor Ige and DBEDT Director Luis Salaveria made presentations during the Okinawa-Hawaii Innovative Energy Forum. This event was aimed at discussing the Hawaii-Okinawa Clean Energy Partnership and plans for future initiatives between Okinawa and Hawaii.

The visit culminated with Governor Ige and the Hawaii contingent sharing the aloha spirit by marching in the Naha Matsuri (Festival) parade. 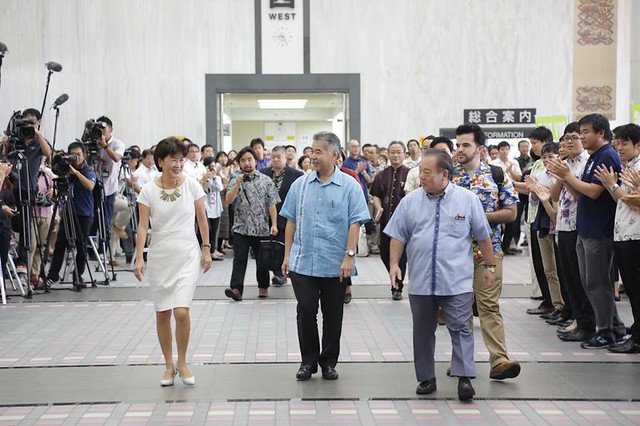