Hundreds Turn Out to Meet Study Hawaii in Taiwan The Department of Business, Economic Development & Tourism (DBEDT) in collaboration with Study Hawaii, a consortium of public and private educational institutions, promoted studying in Hawaii opportunities during the 2014 Oh Study! International Education Expo in Taipei, Taiwan, on October 18 and 19 at the Taipei World Trade Center. During the two-day event, the Hawaii delegation met with over 300 students who were interested in studying in the Hawaiian Islands.

“Study abroad is an educational priority for Taiwan students and their families,” said Joel Weaver, Vice President of Study Hawaii. “Hawaii has an excellent chance of increasing international enrollment with students from Taiwan. The high quality and high value of our educational offerings as well as our safe environment are attractive components in our international student recruitment efforts,” said Weaver. 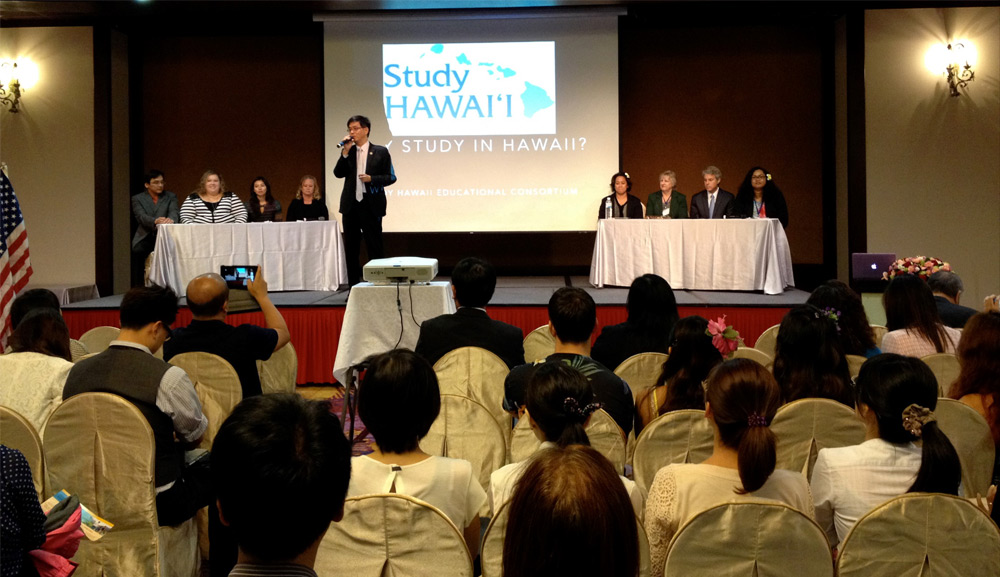 Eleven Hawaii schools joined the Oh Study! Expo and Hawaii seminar to promote Hawaii as an international learning destination during the Expo and Hawaii seminar. “Each participating school, in a mini-trade show format, met with educational consultants, school representatives, students and other officials during the seminar,” said DBEDT Administrator, Dennis Ling. “The direct and indirect economic impact of attracting one student to Hawaii for one year is $50,000. Two international students create one local job. If we can increase the number of international students in Hawaii by a minimum of 200 in one year, it will have a direct and indirect economic impact of $10 million to Hawaii’s economy. It is a clean industry that has the potential to grow with assistance from DBEDT,” said Ling.

As of 2014, DBEDT’s office in Taipei is known as the Hawaii Education Recruitment Center and was highly publicized during the Study Hawaii mission. The American Institute in Taiwan and other educational leaders confirmed that Hawaii has an excellent opportunity to attract Taiwan students as study abroad candidates. These officials are important contacts and resources who can assist Hawaii schools in this effort. DBEDT’s Taipei Office will play an important role in establishing in-country contacts with teachers, education officials, counselors, etc. who have the capacity to influence and expand Hawaii’s brand as a top educational destination.