2015 will mark the 30th anniversary of sister state relationship between the State of Hawaii and Guangdong Province, China

An advance team, led by Madame Su Caifang, Deputy Director General of the Guangdong Provincial Foreign Affairs Office, met with Bruce Coppa, Governor’s Chief of Staff. Madame Su and her delegation traveled to Honolulu to discuss preliminary details for the celebration of the 30th anniversary of sister state relationship with the State of Hawaii. Guangdong Governor Zhu Xiaodan plans to travel to Hawaii in September to celebrate this auspicious milestone. Close to 80 percent of the Chinese in Hawaii can trace their lineage back to Guangdong Province.

Mme. Su and the Presidents of Southern Medical University and Nanfang Hospital also met with Dr. Rosanne Harrigan, Chair of Complementary & Alternative Medicine and Director of Faculty Development at the University of Hawaii’s John A. Burns School of Medicine, to explore ways to collaborate on medical research and medical student exchange programs between the two medical schools. 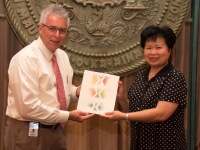 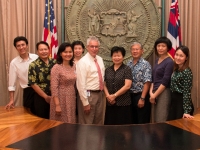