So Ono Keeps Fresh with Help from EZ Program You’re at the supermarket staring at the delicious-looking pineapples, only to come across one of the greatest grocery shopping dilemmas: Do I pick the goldest looking one? Should I thump them to make sure it sounds the same when I hit my wrist? Do I pick the one that’s half green and let it ripen on my counter? If you have asked yourself these questions about pineapples and other fruits, read on!

So Ono Food Products, a Hawaii manufacturer of fresh, ready-to-eat food products, is enrolled in the Hawaii Enterprise Zones program. So Ono is well-known for their pre-cut fruit platters, consisting of pineapple, kiwi, apples, grapes and papaya. Previously, Member Manager Curtis Wheeler owned and operated Fresh Foods Hawaii since 1987, which manufactured fresh cut fruit products to food retailers on Oahu. In 2001, Wheeler partnered with Uzor Nwoko, a food scientist and business man from Fort Worth, Texas, to form So Ono Food Products, LLC.

In order to grow their business during the 2007 recession, So Ono purchased Island Fresh Foods and underwent a major renovation project to expand its capacity. So Ono continued to add new products with the introduction of fresh sandwiches, salads and cut vegetables to its current line. “There will always be a new wrinkle when you least expect it, so it’s best to be ready for anything” says Wheeler.

Today, with over 130 employees and associates in their Honolulu manufacturing facility, So Ono brings to Hawaii’s residents and tourists their fresh food products, with no added preservatives. In addition to fresh fruit platters, they offer ready-to-eat vegetable trays, freshly prepared salads, sandwiches and their newly launched organic Apple Fries. Their products can be found in ABC Stores, Costco, Longs Drugs, Safeway, Sam’s Club, Times Supermarkets, Wal-Mart, and military installations.

With 40,000 pounds of pineapple and 20,000 pounds of papaya being processed each week, a consumer may ask, “How does the company ensure the safety and quality of these fresh foods for the consuming public?” “So Ono will provide only the best quality product for consumers,” states Director of Operations, Nathan Okinaka. “Our company dedicates a great amount of dollars and effort to maintaining food safety standards, from testing products in the lab to having third party food safety inspections. So Ono stresses the importance of food safety through quality control management, training programs, and reinforcements for all associates to maintain our high standards,” says Okinaka.

In keeping with So Ono’s philosophy of continuous improvement and high quality, the company has a HAACP (hazard analysis & critical control points) food safety program and is also an approved Military Manufacturing Facility. They are registered with the FDA, and the company recently completed its GFSI (Global Food Safety Initiatives) certification.

“Participating in the State’s Enterprise Zones program has helped in numerous ways,” said Wheeler. One benefit includes helping the company save enough capital to contribute significantly towards building their new manufacturing facility, which is planned to be more than twice as large as their current site and is expected to open during the summer of 2015. 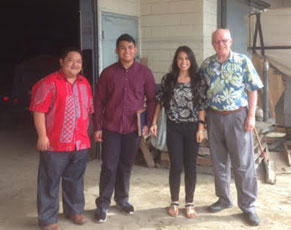 DBEDT is pleased to partner with students from the Hogan Entrepreneurial Program at Chaminade University on interviewing Enterprise Zones participants and authoring these articles.

This Hogan partnership with DBEDT is designed to add another component to Hogan students’ entrepreneurship training, equipping them with new skills and connections as they start their careers. For more information, please see https://www.chaminade.edu/hogan/