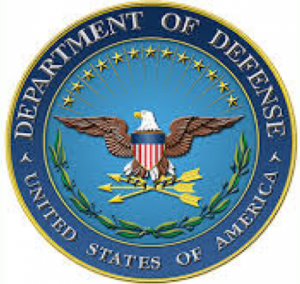 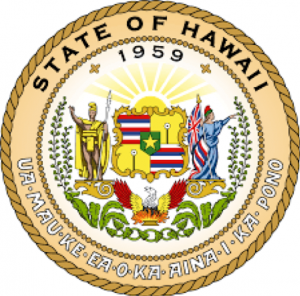 The Department of Defense has a long and rich history in Hawaii. From nuclear submarines to armored brigades, the military provides the Aloha State with both tangible as well as intangible benefits.

This report will provide a brief overview of those benefits as well as a look at the number of active duty, reserve, retired, and DoD support personnel that call Hawaii home.

Perhaps the most visible aspect of the military are the bases from which they operate. No other metropolitan area in the country can claim such a diverse representation of our nation’s military. All branches of the Department of Defense are located within Honolulu County as well as the United States Coast Guard. Below is a brief description of the major military bases located on Oahu. 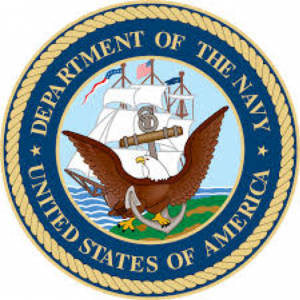 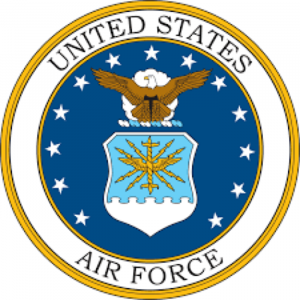 Home to the US Navy and the US Air Force in Hawaii, JBPHH, located on the Leeward side of the island, serves as the headquarters for several vital military commands. Pacific Air Force, Submarine Forces Pacific, Commander Navy Region Hawaii, Pearl Harbor Naval Shipyard, Fleet Logistics Center, and the Defense Logistics Agency are all located on JBPHH. Commander United States Pacific Fleet, Naval Facilities and Engineering Command Pacific and Hawaii, and Defense Information and Technology Pacific are all located within 1 mile of JBPHH. 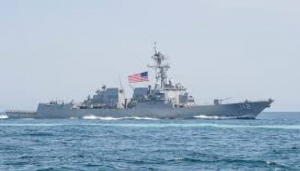 There are also six surface ships currently in production designated as being homeported within the Pacific Fleet. One of those (USS Daniel Inouye DDG 118) will more than likely be homeported at Pearl Harbor.

* denotes the submarine is a Virginia Class SSN. 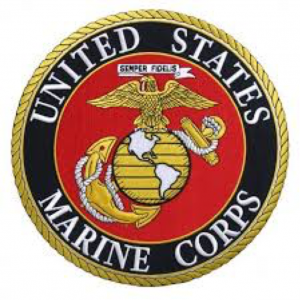 Situated just to the West of downtown Honolulu, Ft. Shafter is home to Commander US Army Pacific, and the Army Corps of Engineers Honolulu District. 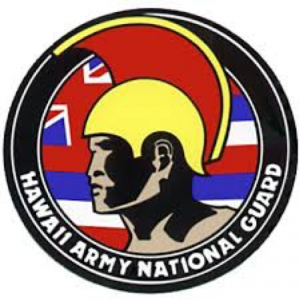 Naval Computer and Telecommunications Area Master Station Pacific is located in Wahiawa, to the North of Schofield Barracks. NCTAMS serves as the communication center for both the Navy as well as other DoD components.

Each branch of the military, in additional to their fixed base locations, is responsible for thousands of active duty, civilian, and contractor personnel. In addition to those military members on active duty, as of December 2018, Hawaii is also home to over 18,000 military retired personnel, with over 17,000 of them receiving monthly pension payments.

According to the Office of the Actuary, US Department of Defense, monthly payments to military retirees in Hawaii, as of December 31, 2018, total $43,987,000 per month or over $527 million dollars per year. Military retired pay is not subject to Hawaii State income tax. 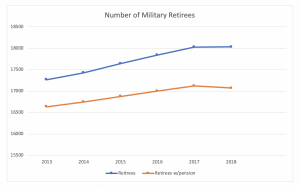 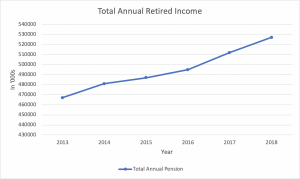 Per 2017 US Census Bureau data, there are over 106,000 veterans who reside in Hawaii. That figure accounts for roughly 7.5% of Hawaii’s population.
Per the SBA’s Dynamic Small Business Search, there are currently 298 Veteran-owned small businesses in the State of Hawaii. However, only 55 are actively certified by the Department of Veterans’ Affairs Center for Verification and Eligibility. Service disabled veteran owned small businesses are eligible for specific set-asides in federal contracting totaling 3% of all federal contracting dollars. Both veteran owned and service disabled veteran owned businesses are eligible for set-asides in VA contracting.

Statistics on active duty, DoD employees, and reserve and National Guard were obtained from the Defense Manpower Data Center quarterly reports.
Hawaii maintains a large contingent of active duty personnel for all 4 branches of the military and the United States Coast Guard. These active duty personnel contribute to our local economy by spending their direct pay and housing allowances on local businesses. Below are the figures for active duty strength for each branch of the military and the Coast Guard as of September 30, 2019.

This represents a decrease of 961 active duty personnel form the same period in 2018.

The Department of Defense maintains a large workforce who support the military mission. These employment areas range from budget and accounting, contract specialists, heavy equipment operators, to intelligence analysts and computer programmers.

This represents an increase of 247 personnel over the same period of 2018. 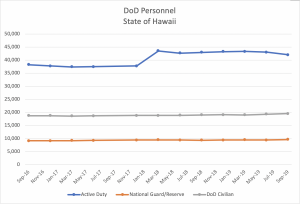 Using the FY2017 Office of Economic Adjustment as the baseline for direct payroll figures for all personnel associated with DoD: